Pirates of the English Riviera

Fortunately, our day of departure, Friday 13th, passed without any noticeable bad luck or malevolent goings‑on.  Arriving ahead of schedule in Torquay, we headed out of town and took the opportunity to go walking.  We parked overlooking a slope frilled with trees and a view over a mini island called Thatcher Rock not far out to sea.

Our route followed part of the South West Coast Path which goes right round the headland, and this would normally be a quiet neighbourhood, contrasting with Torquay’s town centre.  However, like most places these days, there were new constructions going up next to where we’d parked, so the air was occasionally punctuated by a chattering digger.

After our walk, we headed out of Torquay, taking the road towards our site, and were overtaken by a cyclist in regulation hi‑viz vest.  Stammering through the afternoon traffic, we were surprised when the same cyclist overtook us again a mile later, even though he had had to negotiate a hill in the meantime.  So much for motor vehicles having the edge!

Eventually, we found our countryside site at Ipplepen.  Again, we were on another one of the Caravan Club’s CL sites – a field which we would be sharing with two other motorhomers.  Almost at once, one of our new neighbours came over and gave us the site low-down.  As well as the usual water & toilet disposal facilities, this time we had a WC, albeit a rather rickety, ‘countryside basics’ one.  Made from what looked like an old horse trailer, using it was quite an adventure in itself, given that it didn’t feel that solid when the wind blew.

Again, no electricity at this site – just a pure, unadulterated countryside retreat.  There were not as many swallows here, but it was lovely and peaceful, with distant views over Dartmoor.  And, as the farm had livery stables, we again had horses in the neighbouring fields, which were covered in buttercups and daisies (the fields, not the horses!)  One horse in particular seemed to have a bad case of teething trouble, what with his penchant for nibbling vigorously on the wooden fences – so much so that the fence-line had even broken away in places!

The next day, only a few miles away, we were plumped firmly back into the hustle & bustle of Torquay, trying to navigate our way round its one-way system to find a particular parking spot close to the quay.  In the end, we took pot luck and parked up in the nearest Pay & Display we could find.  Judging by the time it took us to walk into town, I’m guessing we’d managed to locate the furthest possible parking spot from where we wanted to go.  Never mind!  At least we’d get some exercise – and we still had to look forward to the nice, long uphill walk to get back there at the end of the day as well.

PIRATES OF THE ENGLISH RIVIERA

Making our way to Princess Pier, we’d hoped to do a ‘Geo-Tour’ with Greenway Ferries.  At the ticket office, we were greeted with a story about the tour guide having a bad back, and were kindly offered a return trip to Brixham at a reduced rate instead, so we took the offer, even though our parking ticket wouldn’t allow us the time to stop off at Brixham for a shufty round.

The boat apparently passed by the same coastline as the Geo‑Tour, which would normally give you a commentary on the caves & geology of the area.  As we chugged along, passing numerous yachts (surprisingly, several had capsized), we could see caves, both big and small, gouged into the orangey-brown cliffs at odd intervals.  In the absence of the official commentary, we had to make up our own, which went something along the lines of The Pirates of the Caribbean, with fictitious smugglers dropping loot off into the caves shouting a hearty pirate’s ‘A‑haaaarrr!’

By the time we arrived at our site, the day was still young; and we had enough time to chill out after our walk back to the car park, as well as get some grub down our necks, before setting off for Buckfastleigh, where Steve had an evening cycle race lined up (more on that in the forthcoming Steve’s Cycle Shorts blog entry).

Although we’ve stayed at this site before, we always manage to forget how friendly the site owner’s dog is.  If it spots you leaving your van, you’ve had it!  Put it this way: I don’t know what its name is, but I think we should call it ‘Bostik’…  Not sure I’ve ever seen a dog so desperate for a friend – although we did come across a farm dog once that played with the sheep the whole time we were there. 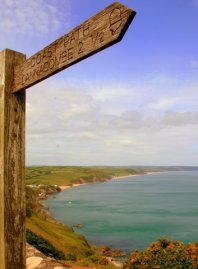 HEADING FOR THE START

Normally when we come to this area, Steve races in the morning rather than at night, which doesn’t leave us much daytime to go exploring.  So it was nice to have the time on this occasion to be able to make a trip the next day to Start Point Lighthouse, some miles south of Torquay.

There were only a few of us on the lighthouse tour at this time of year and it turned out that many lighthouses such as this one were not initially painted white, but were just the original stone.

Start Point helps protect ships from the Skerries, a long crop of rocks beneath the waves that surround the headland.  Of course, many ships have floundered on the coastline there over the years; and, in days gone by, certain structures along the coast – trees or buildings, for example – would have been used as navigational markers.  It was therefore decreed in law that these had to be kept in place.

Although cottages were built at a later date for the lighthouse workers, they originally lived inside the lighthouse and reared pigs on site for consumption.  Our tour guide also showed us a picture of the original lighthouse which managed to drop off the cliff edge into the ocean.

Despite the glorious sunshine, it was rather a blustery day.  Breathing in the heady scent of bluebells on the headland, I made my way back to the car park and took a long, last look at the stunning views along the coast before jumping in the van and heading for home.

We’ll soon be posting another blog for all you Steve’s Cycle Shorts fans, so if you haven’t subscribed yet, just pop your email address in the box to the right and it will automatically be sent to you.

In Steve’s next entry, he’s obsessing about floaters…  So whether you’re a cycling nut or not, I think you’ll enjoy tuning in and finding out what on earth it’s all about!

The pixie/pisky keyring (pictured) was found on a park bench when we took our walk in Torquay’s ‘hinterland’.  Despite the fact that he has been lost, he appears pretty chipper – either that, or he’s had botox and can’t make any other facial expressions.  If you want to know which bench I found him on, please get in touch.

You can also read about our adventures in my book Campervan Capers. Available at all major outlets online. Click here for more info. 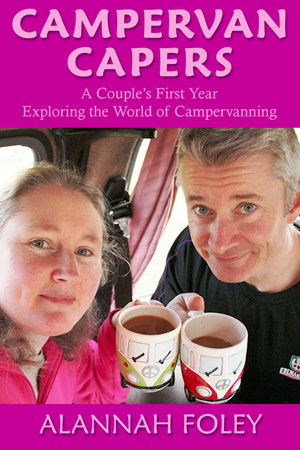 Filed under Devon, Our Campervan Capers

4 responses to “Pirates of the English Riviera”

Feel free to comment on the Campervan Capers blog below... Cancel reply